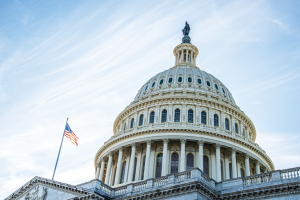 Every single Democrat in the House of Representatives sponsored H.R. 1 – For the People Act of 2021. This bill will completely shatter America’s confidence in our election process. It oversteps constitutional limits by seeking to curtail the states’ rights in an attempt to federalize election procedures and permanently alter the power balance to favor one political party.

H.R. 1 undermines the First Amendment. H.R. 1 undoes key Supreme Court cases that protect elections as fundamental to free speech. It would allow the Federal Election Commission to track and catalogue more of what Americans are saying, register even very small political donations, and make public those who donate to different charitable and nonprofit organizations. The legislation will subject private citizens to intimidation and harassment for their private and political beliefs, far broader than what was done in the IRS targeting scandal in 2013.

H.R. 1 yanks election authority away from the states. H.R. 1 reasserts the ability of the federal government to micromanage state elections through a process known as “preclearance.” Preclearance, which was previously overturned by the Supreme Court, requires states to get permission from the federal government for changes as small as modifying the hours of an election office or moving a voting location from a school gym to the library. Critically, none of these practices would undo any fraud or corruption. Rather, these same practices result in incorrect registrations and inaccurate voter data, while failing to address actual corrupt practices like ballot harvesting. Moreover, they are all designed to eliminate the federalism that keeps elections transparent, local, and fair.

H.R. 1 attacks individual voter integrity. America was founded on the principle of “one person, one vote.” H.R. 1 turns this on its head by weaponizing every aspect of the political regulatory system. The Federal Election Commission, which is currently a neutral body, would be given a 3-2 makeup, guaranteeing a partisan outcome with little accountability toward the actual votes which are cast. H.R. 1 also includes a 600 percent government match for political donations, and authorizes even more public dollars to campaigns. The bill also wants to make “Election Day” a new paid holiday for government workers, with additional paid vacation given to bureaucrats to oversee the polls. All of these changes are designed to distance the outcome of the election from those casting their votes.

• Mandates that states allow all felons to vote.

• Limits the ability of states to cooperate to see who is registered in multiple states at the same time.

• Criminalizes protected political speech by making it a crime to “discourage” someone from voting.

• Bars states from making their own laws about voting by mail.

• Prohibits chief election officials in each state from participating in federal election campaigns.

• 16 year olds will be allowed to vote while in school (guided by unionized teachers).

• No photo ID will be required.

• Criminalizes an individual if an elected official is told they will be” primaried” if they vote or do not vote for particular bills.

• Criminalization if you ask an individual voting if they are an American citizen.

• States not allowed to clear individuals off their voting roles if they move out of state.

H.R. 1 would cause sweeping and irrevocable damage to the free speech, privacy, and voting integrity that are central components to free and fair elections in America.

The bill has been passed out of the U.S. House of Representatives and is awaiting a vote in the U.S. Senate. Contact your legislators, especially your U.S. Senators, TODAY to express your opinion on this massive piece of legislation.

Your freedom depends on it.

H.R. 5 has quickly come through the U.S. House and was passed on February 18, 2021, by a vote of 224‑206 along party lines (with three Republicans joining Democrats to vote in favor of the legislation). It is now awaiting vote in the U.S. Senate, and they are expected to take up the bill very soon.

The proposed Equality Act of 2021 (H.R. 5) would make mainstream beliefs about marriage, biological facts about sex differences, and many sincerely held beliefs punishable under the law. The Equality Act makes discrimination the law of the land by forcing Americans to conform to government-mandated beliefs under the threat of life-ruining financial and criminal penalties. Presented as a bill with common sense and decent protections against discrimination, H.R. 5 is anything but. The Equality Act politicizes medicine and education and demolishes existing civil rights and constitutional freedoms.1

It would prohibit schools, hospitals, “public accommodations,” and in some cases churches from discriminating against individuals on the basis of sexual orientation and gender identity; legally oblige those establishments to accommodate transgender persons in accordance with their preferred gender identity; remove a major “conscience protection” for religious workers, including healthcare workers, and thereby indirectly weaken the legal position of religious employers in hiring workers in accordance with their religious ethos; leave religious colleges open to being cut off from federal assistance if they violate Title VI non-discrimination rules, and could indirectly weaken their protection against having their accreditation removed.

• Designate schools, churches, and healthcare organizations as “public accommodations.” With this, schools, churches, and hospitals could be forced to accept the government’s beliefs and mandates about sexual orientation and gender identity. That would be highly intrusive and incredibly far-reaching. It will threaten everyday speech where people can be fined or lose their jobs for using the wrong name or pronouns.

• Legislate that we allow boys in girls’ sports, boys in girls’ locker rooms, men in women’s shelters, and men in women’s prisons. It will force teachers and students to publicly pretend that a biological male is a female. Schools will be encouraged or mandated to instruct young children that they can choose to be a boy or a girl, or neither, or both—making biological sex (and science) a relic of the past.

• Use the force of law across all 50 states to strip Christian and other religious ministries of their right to hire people of shared faith to pursue a shared mission. Can you imagine a Christian organization being forced to hire people hostile to its deeply held beliefs who have no passion for its beliefs, teachings, and mission?

• Strip health professionals of their rights of conscience. It will force doctors and medical professionals who long to do no harm to engage in gender transition treatments such as hormone-blocking, cross-sex hormones or surgery. It is obvious that a Catholic or faith-based hospital should not have to perform gender transition surgeries that go entirely against all they believe.

• Be a tool used by the government to deny or threaten accreditation to religious colleges and universities if they do not satisfy the demands of the secular Left to apply sexual orientation and gender identity to dorms, sports, places of privacy and even teachings. The Act could be used as a weapon to threaten the availability of federal student loans and grants to students at certain disfavored religious schools.2

In their brochure, “The Equality Act: How Could Sexual Orientation and Gender Identity (SOGI) Laws Affect You? the Heritage Foundation, offers the following:

Congress should honor the Constitutional freedoms of all Americans to think, work, and live according to their beliefs on marriage and biological sex. SOGI legislation wrongly conflates disagreement on these issues with discrimination. All people should be treated with dignity and respect and powerful market and cultural forces are deterring discrimination against anyone simply because they identify as gay or transgender. State SOGI laws have punished non-conformity to cultural orthodoxy. Federal laws should not exacerbate social conflict by doing the same. Anti-discrimination laws are supposed to be shields from invidious discrimination, not swords to punish non-conformity. Our laws should honor the freedom to hold different beliefs in order to protect true diversity and promote tolerance.3

The bill has been passed out of the U.S. House of Representatives and is awaiting a vote in the U.S. Senate. Contact your legislators, especially your U.S. Senators, TODAY to express your opinion on this piece of legislation.